The newest fuel alternative on the horizon? Pee.

U.S. researchers have been experimenting with using urine as a method of producing hydrogen. Not only could this virtually free and readily available resource possibly power automobiles, but it could also aid in the clean up of municipal wastewater. 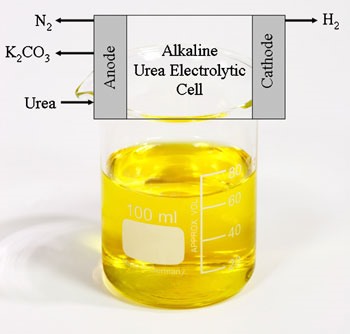 "Using hydrogen to power cars has become an increasingly attractive transportation fuel, as the only emission produced is water - but a major stumbling block is the lack of a cheap, renewable source of the fuel. Gerardine Botte of Ohio University may now have found the answer, using an electrolytic approach to produce hydrogen from urine - the most abundant waste on Earth - at a fraction of the cost of producing hydrogen from water...

Urine's major constituent is urea, which incorporates four hydrogen atoms per molecule - importantly, less tightly bonded than the hydrogen atoms in water molecules. Botte used electrolysis to break the molecule apart, developing an inexpensive new nickel-based electrode to selectively and efficiently oxidise the urea. To break the molecule down, a voltage of 0.37V needs to be applied across the cell - much less than the 1.23V needed to split water..." (Read more).

Human waste + a little science... who would have thought?

If your pee is that colour you've got a serious problem.

I was just thinking that same thing!