Most DIY freaks do-it-themselves because they love it. Because 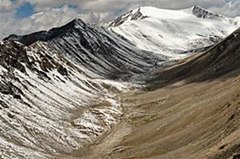 they're curious, creative, and like to take the long road (or figure out an ingenious short cut).

In the case of Chewang Norphel (aka the Ice Man), the need to do-it-himself was a little more dire: the survival of small Indian villages has been severely threatened by global warming.

According to the Christian Science Monitor:

"Chewang Norphel makes artificial glaciers. The reason: The real glaciers have rapidly receded up the Himalayan slopes in his home district of Ladakh in northern most India.

Himalayan communities like Ladakh rely on glacial runoff to grow food, making them – along with tiny island nations – among the first to feel an existential threat from climate change. Mr. Norphel's artificial glaciers represent one of the earliest human efforts at adaptation."

The resources in the Himalayan region of northern India are melting fast - too fast - so Norphel developed a process without the aid of scientists. According to Time magazine, each glacier costs just $7,000, versus $34,000 for a cement water reservoir. 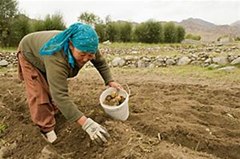 "...20 people with shovels and a backhoe to build the more than 900 feet of rock walls to finish each glacier. The materials are simple: dirt, pipes, rocks – and runoff from real glaciers high above."

Unfortunately over 100 villages in the Himalayan region are in need, and government funding is sparse.

Click through for Christian Science Monitor's slideshow presentation on the issue/process.